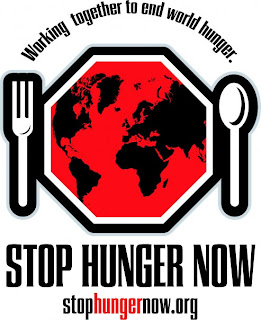 The Jamestown Rotary Club partnered with the Triad Rotary Club in their first Stop Hunger Now project on May 9, 2009. Stop Hunger Now is an organization that partners with volunteers of civic clubs, churches, and schools to help package and provide nutritious meals for hungry people throughout the globe. On this particular Saturday, over 40 volunteers - including Rotarians, members of their families, and residents of River Landing Retirement Community - gathered at River Landing at Sandy Ridge to package 10,047 meals in less than an hour.

Over the past 10 years, Stop Hunger Now has distributed millions of meals to over 65 countries. The Rotary Club of the Triad received a District 7690 Simplified Grant and a donation from the Jamestown Rotary Club to help underwrite part of the cost of the ingredients that go into each meal packet. We had a great time and hope to do this project again sometime.
Posted by Rotary Club of Jamestown, NC at 12:36 PM 7 comments: 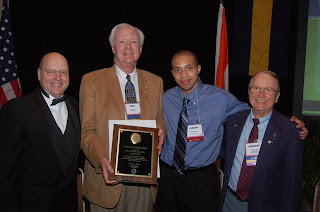 The Gold Club designation indicates and is awarded for achieving all of the Rotary District goals for the club year in the areas of Leadership, Membership, Service, Rotary Foundation and Public Relations.

Our club is honored to have received such a prestigious award and continues to meet and exceed all Gold Club standards.
Posted by Rotary Club of Jamestown, NC at 12:17 PM No comments:

Jamestown Rotary Club recently awarded five scholarships to students at GTCC. There were eight applicants; criteria for the scholarship include being a first year student, maintaining at least a 3.0 GPA, active in community service and financial need.

This year's scholarships were awarded to Gabrielle Austin, Michelle Austin, Jason George, Sumera Syed and Elizabeth Roever. All of the recipients carry a 4.0 GPA.
Posted by Rotary Club of Jamestown, NC at 12:58 PM 1 comment: 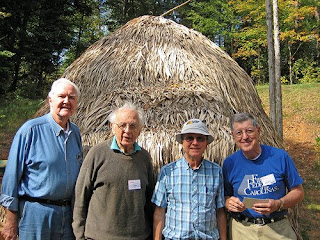 Our club, under the direction of Wes Scott, is continuing its work on our Indian Village service project at Mendenhall Plantation. We have been assisted by local Rotaract Clubs in our endeavor and hope to continue working on the village now that warmer weather is upon us.
Posted by Rotary Club of Jamestown, NC at 12:47 PM No comments: 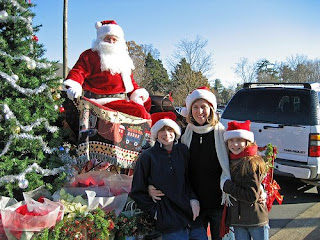 The Jamestown Christmas Parade was held on December 7, 2008. The Jamestown Rotary Club, under the direction of Martin Senell, organized and ran another successful parade. With Congressman Howard Coble as Grand Marshall, the parade had over 80 entries including several schools, bands and civic organizations.

The town again enjoyed the candy and the poinsettias which were distributed.
Posted by Rotary Club of Jamestown, NC at 12:28 PM No comments: 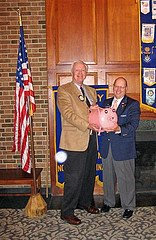 DG Allen discussed the requirements to make Gold Club for the current year. The District's membership plan includes increasing membership by 10%, adding two new clubs in District 7690 and achieving Gold Club criteria for membership in 75% of the clubs.

He also presented the "Stop Hunger Now" project, a District project in which all clubs are encouraged to participate. Each year, over 30,000 children die from lack of water, health care, food and illiteracy. In January 2009, clubs may elect to participate in the project in which rice packages, each which will feed a family of six, will be assembled en masse for delivery to countries with dire need.

Our club is looking into potentially teaming up with another District 7690 club to fund a joint venture. We may also ask our Interact and Rotaract clubs to assist with this humanitarian effort.
Posted by Rotary Club of Jamestown, NC at 7:58 PM No comments: 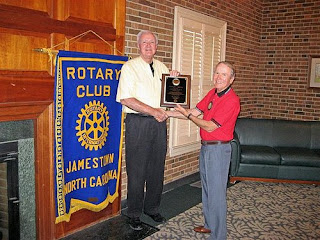 The Jamestown Rotary Club was recently awarded the District Governor's Gold Club Citation for the 2007 ~ 2008 club year. The Gold Club designation indicates and is awarded for achieving all of the Rotary District goals for the club year. These goals include increasing membership by 10% plus and increasing local contributions to Jamestown area charities.

Our local projects include the Indian Village at Mendenhall Plantation, quarterly blood drives, the Jamestown Christmas Parade and Citizen of the Month awards. We have helped sponsor an Interact Student Club at Ragsdale High School as well as a Rotaract Club at Guilford Technical Community College.

Rotary meets every Tuesday evening at 6:00 pm in the Jamestown Town Hall's meeting room. Our next major fundraiser will be the Jamestown Rotary Club's 46th Annual Horse Show which will be held on Saturday, October 4th at the Piedmont Saddle Club in Colfax.
Posted by Rotary Club of Jamestown, NC at 9:31 PM No comments:

Rotary Club of Jamestown, NC
If you are thinking about joining a civic club, consider our Jamestown Rotary Club. We are a small, active club. We enjoy working together on a variety of community, district and international service projects. Visit with us on Tuesday evenings at 6pm at the Jamestown Town Hall, 301 E. Main Street in Jamestown.

This is a Flickr badge showing public photos from jamestown7690. Make your own badge here.